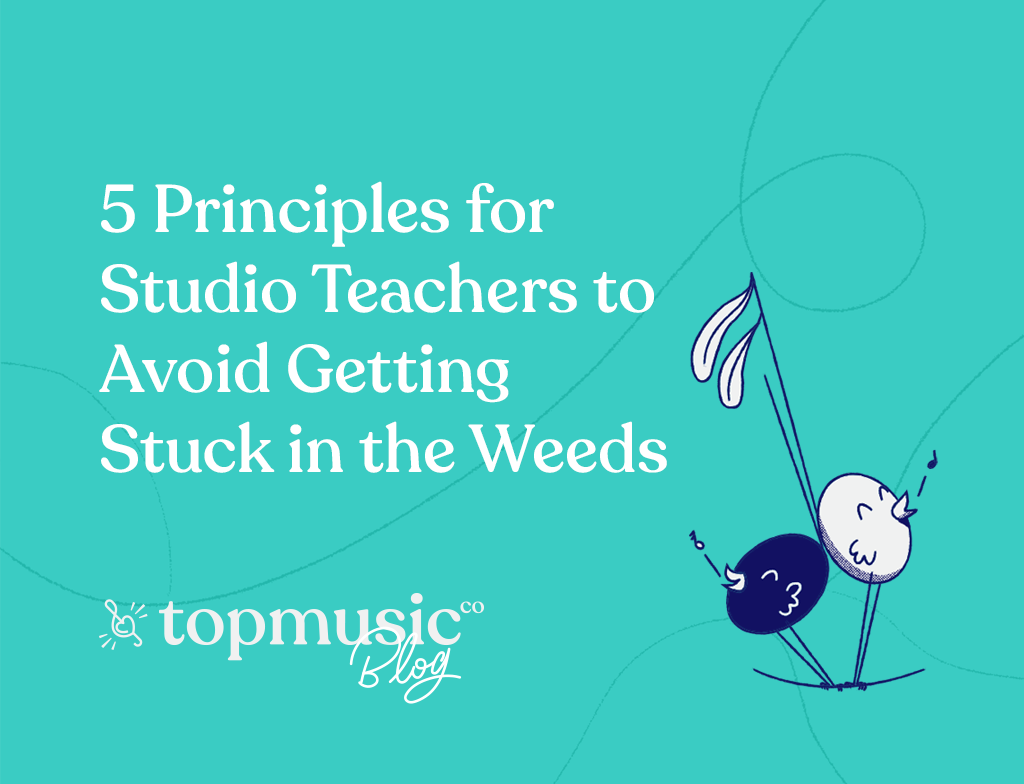 5 principles for music studio teachers to avoid getting stuck in the weeds, with insights from Robert Duke’s tips for simplifying instruction from Intelligent Music Teaching

See if this sounds familiar:

Okay, all warmed up.

The teacher decides to make some progress on repertoire. The student shows the teacher what they’ve practised. It sounds pretty similar to how they played it last week, and the student admits they didn’t get to practice that much.

The teacher gives some advice – your first finger is way louder than your fourth finger, straighten out this arm; the timing is off. They workshop the piece in its complete form for a while, trying to fix up several different issues at once. There are glimpses of moderate improvement in some of the problems. This is a win. The student is improving.

The lesson wraps up with the teacher saying, “Okay, good job. Keep practising the piece like that. See you next week!”

Despite the good intentions of both the teacher and the student, this story describes “just okay” teaching.

In his book, Intelligent Music Teaching, Robert Duke defines artistic teaching as not how to teach in general but knowing what to teach right now.

A good teacher constantly thinks critically – instead of blindly repeating a difficult section over and over, they figure out the exact instruction, direction, or model that will help the student get one step closer to their goal.

Duke says the teacher’s job is to:

Music Teaching Goals: Getting from 0 to 1

We don’t want our students to “kind of” play the piece of music. We want them to play it confidently and comfortably.

Much music instruction ends somewhere in between. The “good enough” mentality kicks in, and that’s where progress stops.

What’s needed is a method and process to help both the teacher and student navigate this common music lesson pitfall.

Here are five principles from Intelligent Music Teaching to use in your everyday teaching practice.

1. Start every day of music instruction at the beginning.

What’s obvious to you as a seasoned musician isn’t apparent to someone just learning. Students need to develop those mental models from working with the fundamentals.

Should you do some warm-up exercises and pick up where you left off last time? Should you just start something new every day? Should you drill the same thing every time until it’s perfect? Duke recommends starting from scratch every day. Whatever the topic of the day, make sure students can perform, describe, and articulate the fundamentals of that idea clearly and precisely before moving on to the slightly more demanding tasks.

This lets students develop those deeper frameworks. They get a lot of small wins that keep up the momentum.

Even though it seems like the instruction isn’t moving fast enough, it doesn’t take long to get through the concepts of the previous lesson. The student is already familiar with them, and they’ve practised throughout the week. The lesson can move forward once the fundamentals have been precisely performed.

After building up this skill, now try adding another layer on top of it.

Related: Learn the 4 practicalities of choosing accessible music and why students love it

2. Make each music teaching step an approximation of the end goal.

While breaking down the sequence of instruction into its fundamental parts, you need to figure out the pieces.

Artistic teachers find the route between a student’s current ability level to where they should be to perform their music beautifully and expressively. Make each increment an approximation of the end goal. There should be no ambiguity for the student between what they are playing, practising, or performing at any given moment and how that activity is getting them closer to the end goal.

If the teacher throws in some random exercises to practice this week that don’t seem helpful in the student’s particular repertoire choice, they will naturally wonder why they need to practice it. By struggling with this particular exercise (for which there is no obvious pay-off), they will probably be demotivated to continue with the rest of the material.

And even worse, they will doubt your competence as their teacher.

3. Find the right level of difficulty for each step.

How much difficulty should be added to each approximation?

With this stringent guideline, it becomes clear that each approximation only increases in difficulty and complexity very slightly. This can be a slow process, but the pay-off for student success is huge.

Related: Not feeling elegant? In fact – if you’re on the opposite spectrum and burned out, consult our chat with Nick Ambrosino about students, motivation, and progress.

4. When you hit a progress wall, leap back instead of crawl back.

Even with the previous three steps, student motivation teeters on a sword’s edge pretty much all the time. They may hit a wall and get frustrated by how little progress they think they’re making.

Duke says it’s better to leap back to a previous task the student can perform reliably and accurately (even if it’s much easier than the current task they are struggling with) than to inch back by a step or two and have the student struggle just enough to feel like they completed the task, but not well.

In the story at the beginning, the student struggles with the warm-up exercise. Instead of brute-forcing their way through it, the teacher can have the student take a minute or two to perform simpler exercises they know they can do.

Like starting from scratch every day, leaping backward gives the student a chance to perform the fundamentals again, build confidence by succeeding at what they’re playing, and build the habit of leaping back any time they encounter too much difficulty practising by themselves. Inching back, on the other hand, creates a situation where the student is effectively practising mistakes during all the failed attempts they make before they perform correctly.

In this situation, the student is concerned with just getting the notes out vaguely correct and ignoring all the aspects of fundamental musicianship that should be top of mind all the time.

If a student performs multiple incorrect repetitions of a task, followed by one correct attempt, it’s tempting to move on satisfied they completed the task.

But this means the student practised several incorrect attempts (meaning they learned more about that) than successful attempts.

How many correct repetitions should be performed when the student gets it? Duke recommends at least as many as there were unsuccessful attempts.

The benefit of doing this during lessons is that performing multiple correct repetitions will become a habit for the student even when they aren’t in the teacher’s presence. And this is mostly what a good teacher tries to do – develop good habits in the work of learning music.

By using any of these key principles of Robert Duke in your next challenging teaching experience, you can reframe feeling stuck and find a path forward.

Which works the best in your experience?

Grant Carson is a guitar player and teacher based in Atlantic Canada. With experience as a classroom teacher and running his own private lessons, he sees the common struggles of people learning and teaching guitar and wants to help them find clarity. He writes about frameworks, tips, and strategies to help self-taught guitarists learn more efficiently and have a happier guitar playing experience at justplaythething.substack.com.

TTTV058: How Passion, Mindset and a Sharpened Saw will Transform Your Teaching

What The Research Says About Piano Practice and Motivation [Book Review]