By Tim Topham | Performance and Recitals 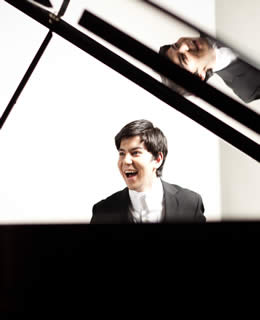 Much as been said about 22-year-old Uzbekistan pianist Behzod Abduraimov since he came to prominence after winning grand prize at the 2009 London International Piano Competition, and so it was with great anticipation that I went to his recital at the Recital Centre on Tuesday 27 March, 2012.

One thing was instantly clear: this guy is incredibly good – no, unbelievably good! In fact, I now read that many people regard him as the new Horowitz!

Right from the outset, I was completely transfixed by his pianissimo touch – it simply just sounded sublime. And how he was able to go from the loudest fff to ppp so instantaneously, I’ll never know! I’m not going to discuss the whole program but just mention a few highlights.

The opening was beautiful (and I don’t normally wax lyrical about Scarlatti) with the B minor sounding almost ethereal and the fanfares and repeated notes in the D major (one of my favourites) incredibly well articulated with gorgeous phrasing and real fire.

The opening movement of the Beethoven was lightning fast, absolutely controlled, precise and without error and the rest of the sonata very well delivered, but it wasn’t until the Brahms that this guy was really able to show off. I actually had no idea Brahms wrote music like this – I would have put money on it being Liszt as I was watching – full of fireworks but with just as many tender, careful moments. If I hadn’t noticed the sweat starting to drip off his forehead, I would have said that he made playing these variations look like child’s play.

The Danse Macabre and Liszt were as incredibly well-phrased and technically perfect. I’m still not as into Liszt as much as other composers, but my teachers expect that will change as I get older. One unexpected delight was a very long section in the slower Liszt piece where he was able to make the piano sound more like a harp than I’ve ever heard, or thought possible. In fact I think this was the best example of ‘bringing out different colours’ that I’ve experienced on a piano. He followed the concert with three encores and had much of the audience on its feet.

I must say that the experience really struck a chord with me (OK, I had to use a music pun somewhere!), more so that others I’ve seen at the recital centre in the past couple of years. Apparently Behzod has come through the same teaching lineage as me – perhaps I can feel that resonating subconsciously with the way he goes about his playing? Regardless, it was truly the playing of a master pianist…and he’s only 22! What on Earth is he going to do next?!

I’d strongly recommend seeing him if you get the opportunity in the future, or check out his recordings on iTunes.

BRAHMS
Variations on a Theme of Paganini, Op.35, Book I

LISZT
The Blessing of God in the Solitude from Poetic and Religious Harmonies, S.17
Mephisto Waltz No.1

Barenboim – A Life in Music