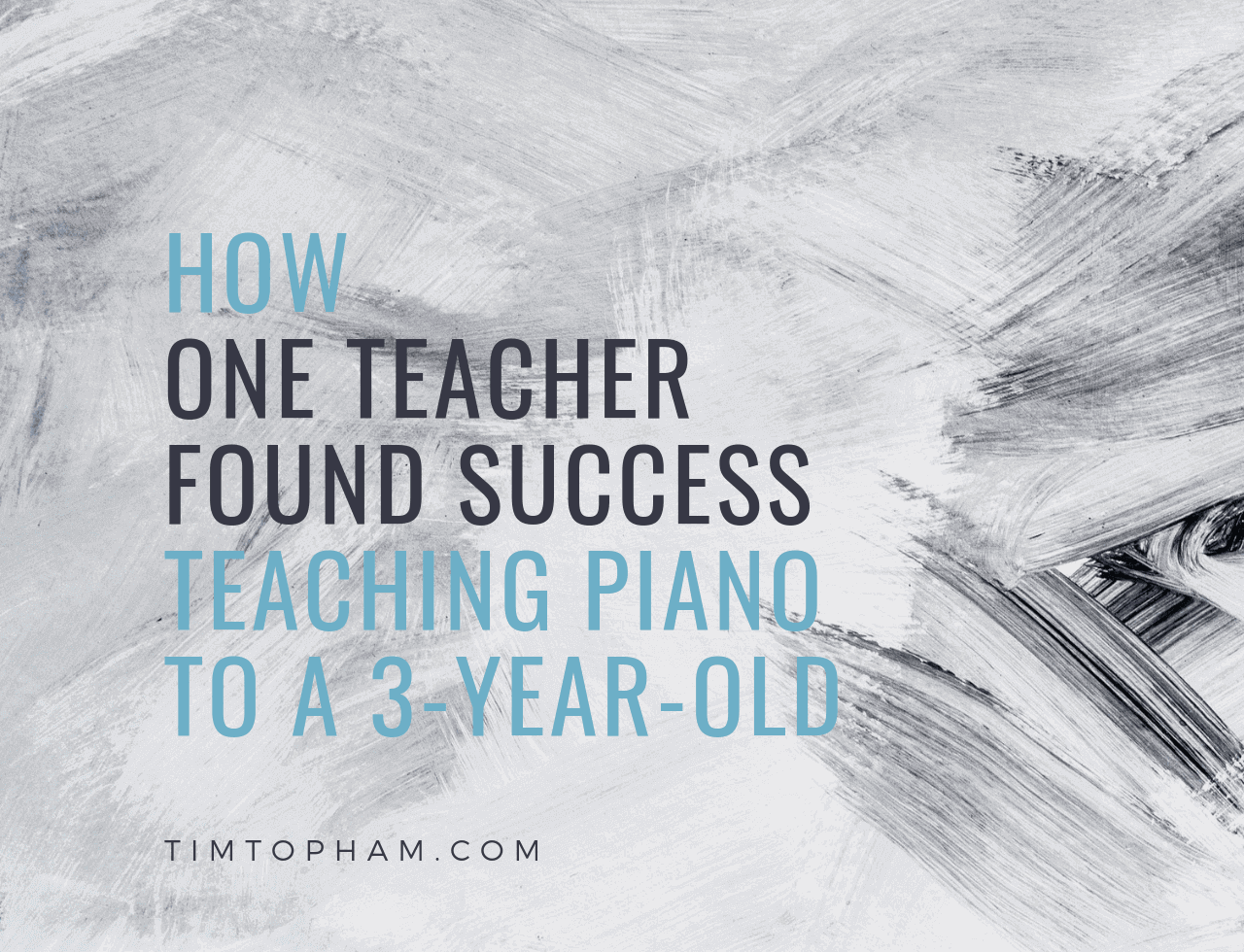 Is it possible to teach a 3-year-old to play the piano? Can you have success teaching piano to a 3-year-old?

At what age should a child start with piano lessons?

Many teachers have varying thoughts on this subject, but from my experience, most of my colleagues strongly believe a child should learn numbers, letters, and how to read first. So, most teachers feel comfortable teaching a 5-year-old student.

I personally love working with very young children, and I had a chance to teach a 3-year-old to play the piano. It was hard at first because the lessons needed to be adjusted and my expectations changed.

Once I found the right approach and managed to get the child’s interest, I got excellent results from their piano lessons.

How I Created a Suitable Piano Class

If you have children of any age, you certainly noticed that they pay attention only to what they want and when they want it.

For example, my child can watch a movie for more than an hour, but as soon as we give her dinner to eat, she’s all over the place, and without reminding her to take a bite, she probably wouldn’t even finish it. If you saw my daughter eating, you would probably think that she just doesn’t have a good attention span.

But since she’s three, what can you expect, right?

Read more: How to teach a preschool-aged student through movement

Because she manages to focus on a movie for more than an hour, the problem is not in her attention span but in her interest.

If a child is forced to focus on things that don’t interest them, they will have a shorter attention span. So, the first step of successfully teaching a 3-year-old piano is to engage children in lessons and make them interesting for the child.

After that, you should worry about their length of attention. 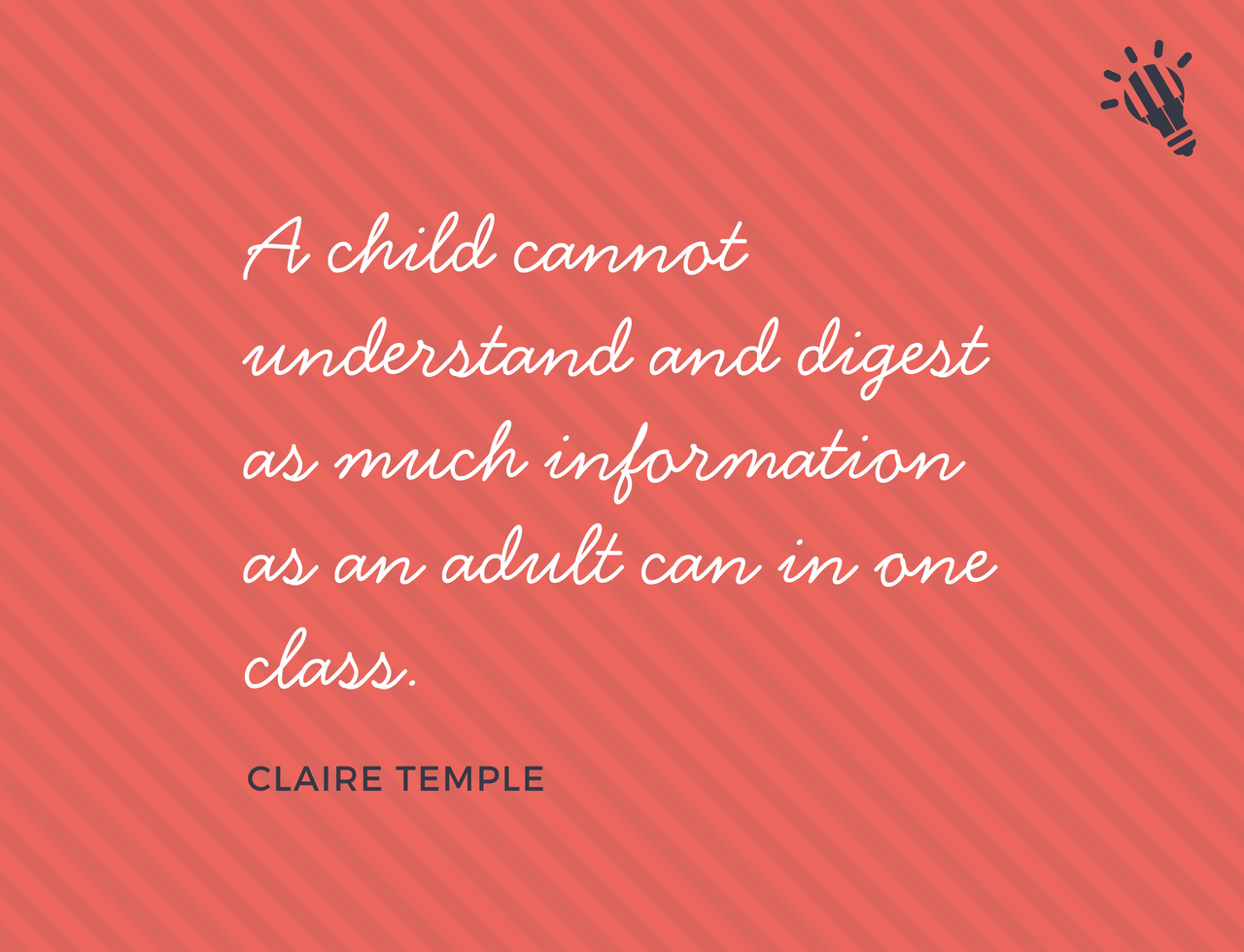 My First Experience Teaching a 3-Year-Old

The first time I had to teach a child that young to play the piano, my lessons were held for 30 minutes.

During class, I would explain concepts, and I wouldn’t move on until I got confirmation that my student understood me. I would repeat sections of music over and over, and no matter how hard I tried to maintain my student’s attention, he wasn’t paying attention at all.

By the end of the half hour, we were both frustrated.

I knew that if I didn’t change my approach, he would start hating the piano. So, I decided to keep the lesson only as long as my student could pay attention to, even if it was only for five minutes. At first, I thought my student wasn’t learning anything, but after a few days, I saw he actually retained what we were learning from day to day.

After a few weeks of shorter lessons, the student started to find the classes more interesting. He also began to understand what I was talking about better, and most importantly, he wanted to apply what he had been learning. All of this will helped him pay attention to lessons longer, so I was able to prolong them to 30 and 45 minutes.

Another crucial distinction to understand when teaching children and adults is that children have smaller short-term memory. A child cannot understand and digest as much information as an adult can in one class. So, it’s vital to change your expectations.

What I Taught My 3-Year-Old Student

Since the lessons must be interesting, the key to keeping a child’s attention is variety.

I didn’t work on one piece of music for half an hour like before. Instead, I worked on a piece for only 3-4 minutes because that was his attention span for harder lessons. Once my student began to learn and started enjoying the lessons I prolonged them.

Sometimes, I repeated myself every lesson to provide daily reinforcement on previously learned things.

When practicing rhythm, I explained things in the simplest way possible. We clapped out a rhythm together. My student didn’t recognize numbers or letters yet, but he could count to ten, so I used that to explain to him what a quarter note was.

I said, ‘It gets one beat’, and showed it to him by clapping out a rhythm. I started with four quarter notes.

Showing them beats this way might be confusing because I just told him each note is one beat.

Lastly, I showed him a half note and explained it gets two beats. We clapped out a rhythm like in the image below. I always count out loud and make sure my student is also counting.

The last step of rhythm practice is to get them to play this rhythm on the piano. I let my student play it in any note as long as he gets the correct rhythm. Letting the child pick the note he wants to play gives him a sense of control over the lessons.

My student managed to understand this after three lessons. I repeated exactly the same lesson three times until he got it right.

Read more: How to teach beginner students with NO BOOK for 10 lessons | FREE DOWNLOAD

Some things such as rhythm practice have to be explained in a simple manner. However, there is no need to simplify musical vocabulary.

Children are very smart and they will understand it with repetition. Also, simplifying things such as calling a quarter note a short note can create problems because then you won’t be able to explain an eighth note and a whole note.

I Worked Every Day both on New Music and Old Music

When working on new music, I always introduced it at the beginning of the lesson, but before adding a new piece of music, I put out a rhythm game, or something fun to catch the student attention, and warm up.

As it’s important to work on new music, it is also important to spend a few minutes a day playing through old music. Giving my student a chance to really master each piece boosts their self-esteem and gives them a sense of accomplishment. 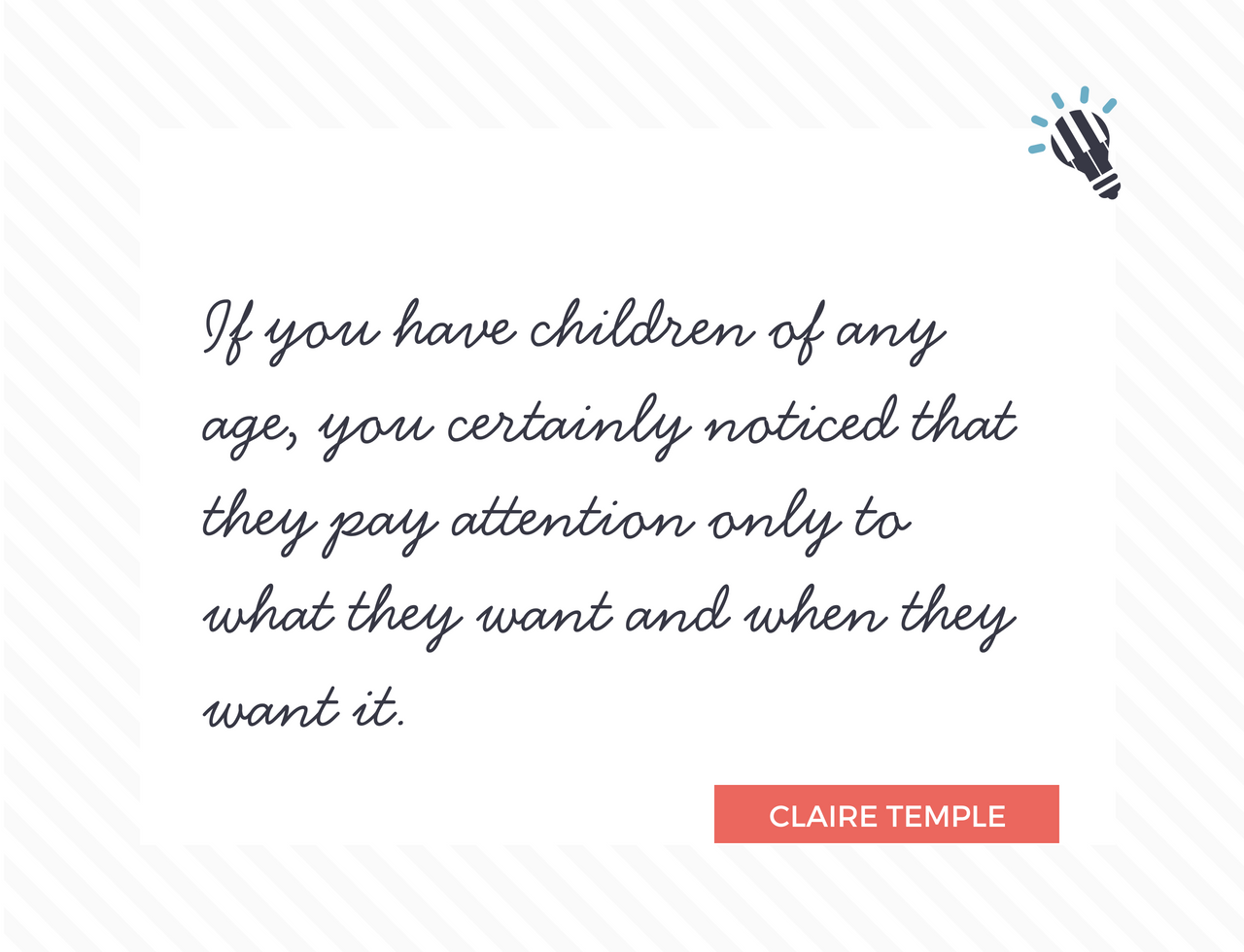 I Focused on Technique

Due to concern for reading music, many teachers sacrifice teaching students to play with correct technique. Every child should at least learn to sit correctly, naturally curve their fingers while playing and simply know everything a good pianist does about posture and hand position.

If you don’t focus on this early on, the child may develop bad and unhealthy playing habits.

Tim Topham’s Preschool No Book Beginners course shows you how to teach young students without a method book! Sign up to the Inner Circle for access to this course and plenty more.

I Improvised a Lot

As I mentioned before, ensuring lessons are fun is very important in order for them to be successful.

So, feel free to improvise whenever you want to. For example, my student followed only one simple rule such as he may play only three notes, like C, D, and E.

After that, improvise and add the entire five-finger pattern. Under the student’s improvised melody, play a simple chord progression.

During improvisation, I always encourage students when they are going well. Also, when my student plays all notes sequentially, I encouraged him to work with different intervals. I simply say, ‘You can sometimes skip notes’.

The first time, he didn’t get it, but with my consistency, he started to understand and eventually made progress. 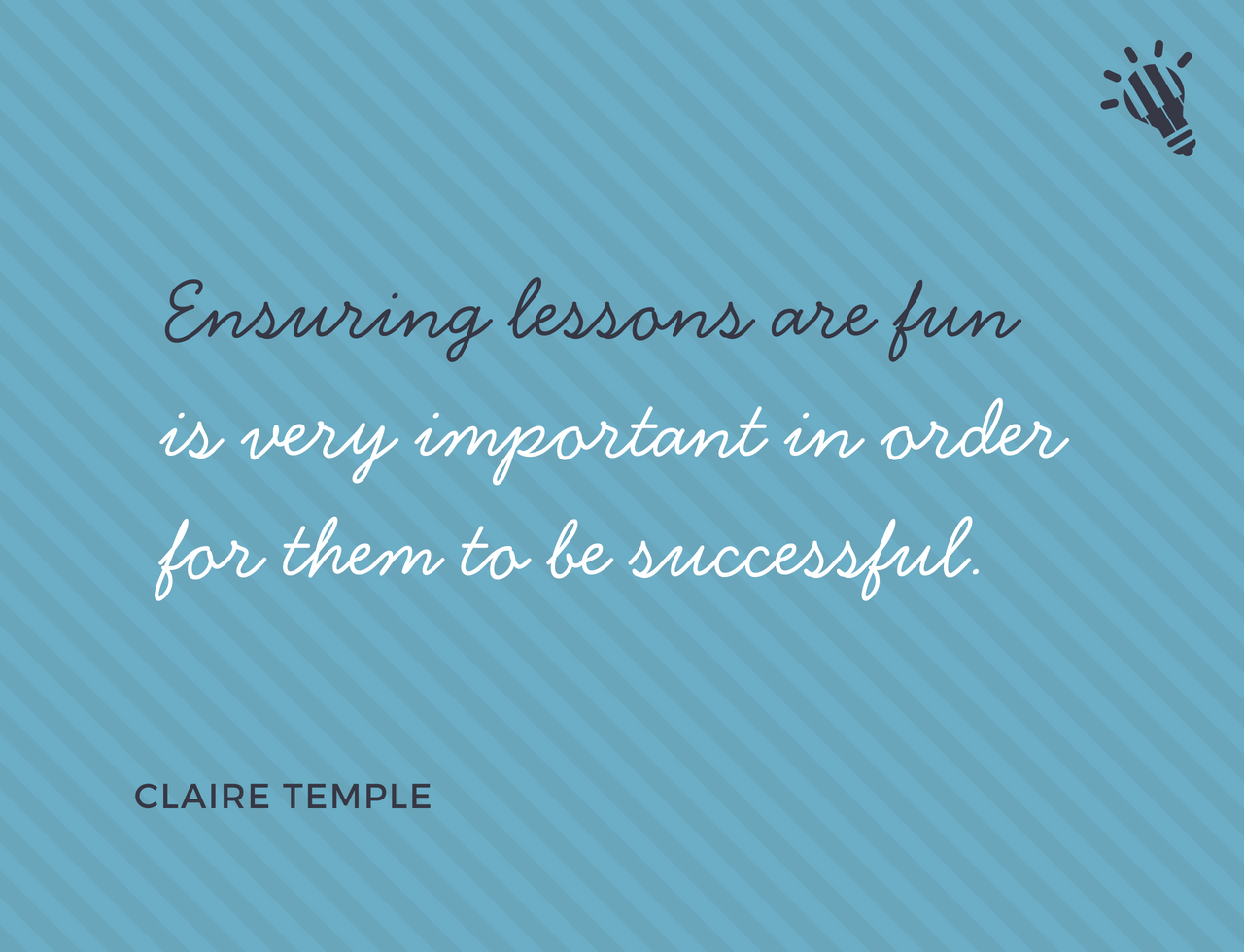 I Never Gave Up

Living in Long Island, New York, I gave lessons to children in the community and learned that teaching children that are younger than five is not easy, but that doesn’t mean you should give up only after the first three or four lessons. There is no need to wait and not use the child’s increased learning capability at that young age.

Instead, try until you are really sure it’s either working or not.

When I first began teaching a 3-year-old, I started teaching the name of the notes and their position on the keyboard. It took me a couple of days to teach my student where A was. I thought he would easily figure out where the rest of the notes are (such as to sing the alphabet while moving from one note to the next), but he just didn’t get it because the note he was singing wasn’t the note he was playing.

So, I decided just to hover over the note without playing them, and that worked. Finding notes on his own didn’t work until lesson five.

Although we were both frustrated, we didn’t give up. I repeated everything until something clicked, and on lesson five, my student showed me where C was. First, he would go to A and found C by singing the alphabet. Soon after, he stopped singing out loud and eventually just found the notes without the help of the song.

What would have happened if I gave up that first day? He wasn’t too young; he just needed a bit of persistence. So, just don’t give up. I am not saying every 3-year-old can learn to play, but I am simply asking teachers and parents to give the children the same chance as I did.

Have you had success stories teaching young students? Leave your thoughts below.

Claire is a professional musician, a writer and an educator. In her free time she loves sunbathing and watching action movies. Claire gives piano lessons in Huntington.

How to Include Jazz Modes in Beginning Piano Lessons