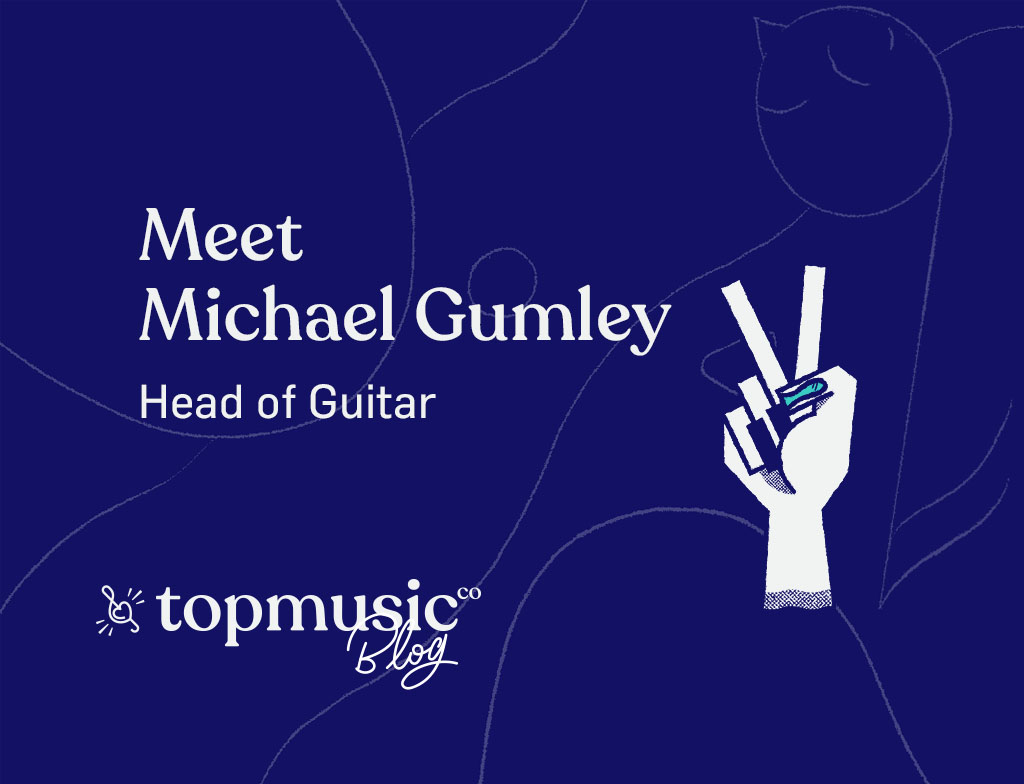 Hello and welcome, fellow guitar teachers! My name is Michael, and I’m the owner of Melbourne Guitar Academy in Australia and am excited to be partnering with TopMusic to help guitar teachers improve their educational skills and financial IQ.

For now, I wanted to take a moment to introduce myself and tell you my story.

Where things began with guitar playing

My journey probably has many similarities to yours. I learned from several teachers (some good, some bad), and practised religiously, wanting to be the best guitarist in the world (like most of us do early on). I also had some unique circumstances (like an arm injury that stopped me from playing the guitar for close to three years). Regardless of the ups and downs, my passion for guitar has never wavered, and even fifteen years after starting this journey, I know that I am nowhere near ready to slow down.

I started playing the guitar when I was 15 by taking lessons from my local high school. I got the rock bug and was obsessed with becoming the world’s greatest guitar player and put 4-6 hours per day into playing the guitar. I knew from the first note (even though it was a total bung note) that I wanted to play the guitar for the rest of my life, it was like I had been hit by lightning, and this whole new world of playing the guitar was mine to explore.

My career trajectory was to go to university to study music and then complete a diploma of education so that I could become a classroom music teacher (back before you needed a graduate diploma). I said to myself that “If I can work a 9-5 making music and have time at the end of the day to do what I love, then that’s good enough for me…”

How wrong I was back then. (but we’ll come back to this later)

My encounter studying guitar with an arm injury

Fast forward to my second year of university, and I had an arm injury. Six hours of practice a day mixed with either a gym workout or 4 hours on a register at the local supermarket caused the nerves, muscles and tendons in my hands and forearms to wear out and what I thought was tendonitis and tenosynovitis became nerve damage in the form of cubital tunnel syndrome. I pulled out of the practical subjects of my course and spent the next 12 months trying to heal my arm.

I tried everything under the sun, from acupuncture, kinesiology, chiropractors, osteopaths and everything in between (even visiting energy healers to see if they could work some magic on me).

Still, nothing worked, and I ended up having surgery to decompress the ulnar nerve in my fretting hand elbow.

After the surgery, I had to reprogram the neural connections linking my break to my arm and hands and relearn how to use my hand and fingers. This meant not only did I have to relearn guitar, but every basic daily activity.

During the recovery, I was only allowed to play the guitar for 5 minutes three times a day, then 10 minutes, then 15… While this might not seem like a lot of time, it was a blessing in disguise because I learned how to make the most out of the little time that I had. 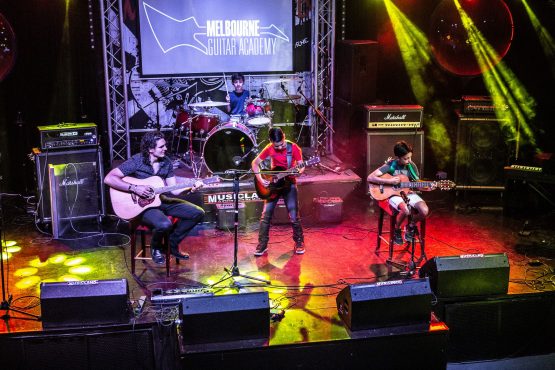 Michael Gumley and students rock it on stage.

I researched and explored memory hacks and looked into how the best athletes and high performers in different industries could master time and get the most out of every minute so that they could fast-track their success and get ahead of their competition. This allowed me to master my schedule and get more out of 10 minutes of super-focused efficient guitar practise than I used to get out of a whole hour of practising before my injury.

When I compounded the new learning techniques and practice efficiency routines, I made more progress in a few months than I had the entire five years I had been playing the guitar prior.

This became the prototype for my guitar method which uses a combination of learning psychology, sports science, and high-performance mindset coaching to turbocharge results. Soon I was recreating it with my students, too.

The US Guitar Tour that Wasn’t, and the Catalyst For Change

I went back to university and immersed myself back into music studies. Around the final year, I started to question whether the trajectory I was on was (and had been dead set on achieving) was the right path for me.

We’ve all had one lesson in our lives that changes us forever. Mine came when my usual teacher was away and the head of guitar at the institution filled in.

This particular teacher (whom I greatly admired) told me how they opened for (famous jazz guitarist) Mike Stern on his Melbourne Tour. Mike was so impressed that he invited them to open for his Sydney and Brisbane shows.

On the final night of the Brisbane show, he sat them both down and eagerly told them the great news after they came off stage.

“I’ve just been on the phone to the record label, and I have something very special to tell you.”

“We’re going to offer you the opening spot on our US Tour next month, 40 shows coast to coast.”

They couldn’t believe it!

“And the label also wants to sign you two guys up to record an album.”

Could it have gotten more perfect?

They had literally made it.

The next day after the three shows had wound up, my teacher arrived back in Melbourne. His wife asked him how the shows went, and he couldn’t contain himself, “Honey, I’m going to America! We’re going to do a 40 show US tour with Mike Stern, and then at the end, we’re going to record an album and get signed to a major label. We’ve finally made it!

His wife’s expression changed from joy at seeing her husband after a few days away, to worry, then fear, then anger.

The next day my teacher called the other member of his duo to tell him the bad news.

“I’m not going to be able to go to America.”

And just like that, the once-in-a-lifetime opportunity that they (and countless other guitar players) had spent years working towards was gone in an instant. They missed it because they hadn’t set their lives up in a way that gave them the freedom to pursue their musical career, the money necessary to support themselves financially, or the time they needed to balance their commitments.

After hearing the story, I instantly felt a bad feeling in my gut because it dawned on me that all of the teachers in that institution (and most other institutions) were in the same position. They were all great musicians and teachers stuck in a 9-5 job, which wasn’t their ideal career. It ultimately took their attention and energy away from what should have been their main goal: pursuing their dreams.

At that moment, I knew I didn’t want to become a classroom music teacher stuck in a 9-5 teaching a room full of kids when only some want to be there. Nor did I want to spend the next 40 years working part-time at a few different music schools to make ends meet. Instead, I wanted to create a life where I would have the time, money and freedom to do whatever I wanted to without compromising.

That’s when I started trying to find other people who were doing what I wanted to do.

Shortly after this, I read books like Rich Dad, Poor Dad and The 7 Habits of Highly Effective People, which prompted me to get myself and my finances more organised. However, it wasn’t until I read a title called Think & Grow Rich that things really changed, and a new fire (which rivalled the one already burning for guitar) ignited too. 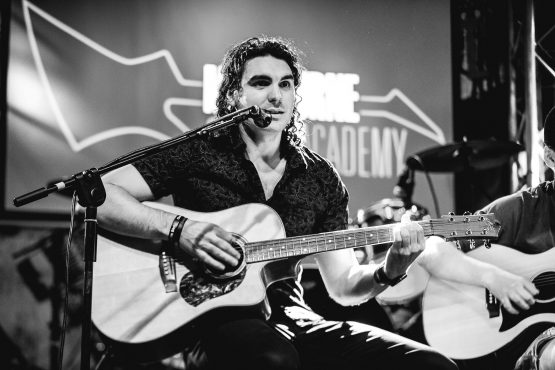 Michael Gumley in his element at an event.

Long story short, I began investing in personal development books and programs, got myself organised, treated my business seriously, and became proactive in creating the life I wanted to create. Then at age 25, six months after getting onto the personal development bandwagon, I decided to take the plunge. I quit my job at Coles, broke up with my girlfriend at the time (who wanted to know when I was going to stop playing the guitar and get a real job) and decided that I would go 100% all-in on my music career and my music teaching business.

It was the best decision of my life.

Today (six years later), my business Melbourne Guitar Academy is now a premier guitar school in Australia with a team of ten teachers and revenue of over half a million dollars annually. It all started with a decision to take control of my destiny, invest in myself, and work on making my dreams a reality.

Related: Read about how we’re making plans to build a program for like-minded guitar teachers.

It’s not just my story that counts though. Ultimately in leading TopMusicGuitar, I want to give other guitar teachers the same benefits I’ve experienced, through sharing these techniques, lesson plans, growth mindsets, and finance savvy that you’ll need to write your own guitar teaching success story.

Whether you want to earn $50k-$100k teaching guitar, create a life around your creative music endeavours, or simply become the best teacher you can be, TopMusicGuitar is going to be the place to be!

I invite you to come on a journey of self-development with us…it will change your life.

Sign up here and join the list to be the first to know about guitar news and our upcoming guitar webinar.

Let me know in the comments — what resonated for you? Have you had to overcome an injury playing guitar? Did you have doubts about whether guitar teaching is a legit career path? Read a fav book from my short list? Let me know what you think!

Michael Gumley is founder at Melbourne Guitar Academy, creator of Guitar Dojo Online and Guitar Ninjas, and TopMusic’s Head of Guitar. He rocked his start at guitar playing at age 15 and was instantly hooked. Michael brings his passion for music and love of all things guitar to every lesson, and seeks to help students capture that same excitement and wonder on their own journeys.